Are you interested in trying a new instructional framework for your research projects? Have you wanted to collaborate with your librarian but weren't sure how? If you answer yes to either of these questions this post is for you. Before Thanksgiving, English teacher Mike Kelley invited me into the planning process for his 10th grade research project about migrant farm workers. We talked about his wish to make the project engaging and supportive during hybrid learning. I proposed trying Guided Inquiry Design, a framework I learned about a couple of years ago at a workshop sponsored by the Massachusetts Library System. The workshop was led by Dr. Leslie Maniotes, one of the authors of the framework, so I had a solid idea of how it worked and the research behind it.  Mike bravely said yes to Guided Inquiry Design and we worked together to figure out how to put the 8 step (!!) inquiry framework into practice and adapt it to his timeframe and learning goals. This was hours of grappling w
Post a Comment
Read more

"Go online and search your topic for 20 minutes": Leveling up students' browsing strategies and skills 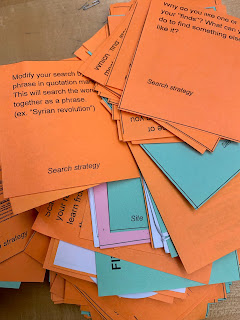 The problem Every year students surprise me with the way they navigate the internet, or "read online."  Kim Young noticed when she asked 9th grade students to browse the internet for introductory research, 60% of of them didn't show the skills, strategies and behaviors associated with consciously browsing the internet to get an introduction to a topic. The solution In the Advanced Innovative Learning Team (AILT),  Kim and I discussed this data point and decided to create a lesson using a deck of cards to scaffold student browsing during the initial research phase of the 9th grade Global Concerns project. Students research three different geographical areas for 20 minutes to get a feel for which one they might want to select for their extended research project. We opened the lesson by modeling a Google search, paying particular attention scanning article titles, URLs and snippets. Most students click on the first result, and we want them to use the strategy
Post a Comment
Read more

Alexa in the library 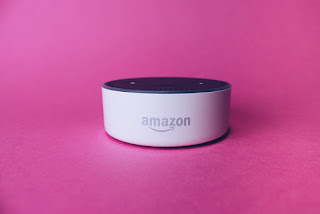 I'm part of the the Advanced Innovative Learning team led by Kerri Stoffel and Kim Young. This group gives me the time and support to explore new technology. I have a split focus for this year: understanding and making Alexa skills for the library, and integrating geospatial data into freshman history classes with Kim Young. Last week I attended the tinkering day at the Weston Arts and Innovation Center with the entire group.  I worked on the Alexa project. Alexa is the voice assistant for the Amazon Echo. There are a bunch of other products like this on the market, like  Google Assistant , Siri and Cortana . I became interested in working on this because I had heard a lot of talk online about voice assistants in the library, some against because of privacy issues, and other pro, because of the additional services they can offer patrons about the library program. Some people believe voice assistants are the next wave of library services. Personally I'm horrified b
Post a Comment
Read more

November 13, 2019
I attended the Northeast Regional Media Literacy conference this past weekend.  Being around media literacy scholars and teachers reminds me how critically conscious consumers of media are empowered, independent, analytical,  informed, active citizens: just the profile we wish for our students. One of the most interesting things about being a librarian is being immersed in media, and noticing how media has changed over time. I was a 20th century kid. Media was books, Pong, print newspapers and magazines, movies in theaters, channels 2, 4, 5, 7, 9, 11, 13 and, once I hit middle school, Wometco , the fledgling NYC area cable channel featuring Uncle Floyd . Here comes the refrain: now we live in 24/7 media cycle. 21st century students live in a completely different media environment than the one I grew up in. The Action Coalition for Media Education summarizes the shift beautifully: Epistemological shift : from 20th century WORD to 21st century IMAGE Tech
Post a Comment
Read more

Tempests and Slaughter by Tamora Pierce My rating: 5 of 5 stars Entertaining, compelling, imaginative, thought provoking and full of soul. It starts out freakishly like Harry Potter, which stressed me a little, yet develops far beyond that into 100% original Tamora Pierce. The descriptions of magic are awesome, and the gladiator arena setting is masterful. The themes and plot relate to our present political and social dilemmas. Seeing friends with foundationally different beliefs developing a close, trusting, nuanced relationship is inspiring and instructional, a valuable vision for the socially divisive age in which we live. View all my reviews
Post a Comment
Read more

January 29, 2018
I read some fabulous books over the past year. I use Goodreads to keep a record along with quick reviews. I pushed myself to read nonfiction this year which challenged and enriched me. The titles are linked to my brief Goodreads reviews.  Russia The Unwomanly Face of War by Svetlana Alexievich Voices from Chernobyl: The Oral History of a Nuclear Disaster by Svetlana Alexievich The Brothers: The Road to an American Tragedy by Masha Gessen Eco-saga Barkskins by Annie Proulx Mental Illness Turtles All the Way Down by John Green Allegedly by Tiffany D. Jackson Still Life with Tornado by A.S. King Surprise endings Genuine Fraud by E. Lockhart Everything, Everything by Nicola Yoon The Goldfinch by Donna Tartt Money Landscape with Invisible Hand by M.T. Anderson Evicted: Poverty and Profit in the American City by Matthew Desmond The Mandibles 2025-2047 by Lionel Shriver Dystopia Scythe by Neal Schusterman Nazis We
Post a Comment
Read more

Goodreads 2018 Reading Challenge: Beat me and I'll make you lunch 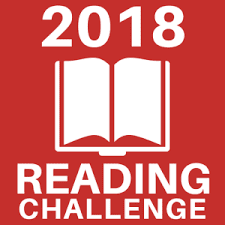 Sometimes I can't believe my good fortune to have a job where I am actually *paid* to read. I can even do things like enter Goodreads' annual reading challenge, set my reading goal for the year, and happily check off books as I read them. This year I set my goal at 55 books, and challenge you, my students and colleagues, to beat my number. If you do, I will treat you and five of your friends to homemade lunch. I am a good cook. Join Goodreads for free, follow me ( Weston High School Library ), and set your 2018 reading challenge. My 2018 Goodreads Reading Challenge
Post a Comment
Read more
More posts