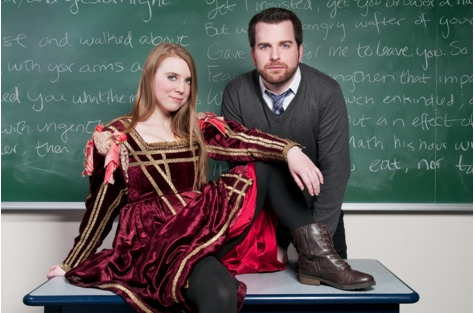 
John Minigan's play, Breaking the Shakespeare Code, is in production in Boston! Mr. Minigan reports that:

"Breaking the Shakespeare Code, a full-length play, is opening on March 6 at the (tiny) Factory Theatre in Boston's South End, produced by Vagabond Theatre Group. It runs through March 15.

'Code' is the story of the complicated emotional and artistic relationship between an actor and her 'coach,' told in three scenes/three rehearsals that cover sixteen years. It's been done elsewhere, but this is the first time it'll be on its feet in Boston.

The Salt Lake Tribune called it '...a taut relationship drama about a series of acting lessons that turn into emotional duels... the kind of tense entanglement that happens in real life but rarely onstage...'

If you prefer comedy to taut relationship dramas, the Orlando Sentinel called it 'a serious comedy.'

The Vagabond folks have been lovely to work with and have helped me polish the piece for two productions slated for later this year in Chicago and New York.

There is more info on the play (and some rehearsal stills from a couple of productions) on my website www.johnminigan.com, and a show listing on the Boston Event Guide--with a link to tickets."

If you're in the mood for more things Shakespeare, check out these related titles from our collection

Your library on the web